What we got right and what not for our Visual Novel Game Jam: Build 0.5 build and progress report.

The Prince’s Heart is practically our first “brainchild”. And although I hate the term “child” since video games aren't anyone's child, but nothing more than entertainment products, that's how we creators usually behave with them. Of course, our first complete video game as a team is Dragon Gazer, a small 1000-word visual novel game for the O2A2 jam, we consider The Prince’s Heart to be our first “actual” project since it’s complete in terms of narration, character design, and worldbuilding.

But, like most parents with their first newborn, we made some critical mistakes that we should have foreseen in terms of production and deadline, but well... we didn't, and that's a hard-earned lesson that we should keep in mind for our next projects.

What we got right and what not

We were lucky enough to have with us Jacob Wilson, the person responsible for the entire casting and scouting process. Every single voice-over in our game has been voice acted by aspiring and professional voice actors, and I really think that the result will be amazing. More about our cast can be found here.

A.C. Kass made the outline really quick and wrote the entire story on time, giving the rest of the team the much-needed time to do voice-overs, compositions, SFX, coding, and sprite design. In a couple of days, we had a 16,000-word script ready to be coded and implemented.

And that's where we failed to understand that the project would get out of hand, considering that it would be practically impossible for a single artist to have eight characters and eight backgrounds made in a relatively short amount of time, while at the same time we were completing our O2A2 jam project.

What we learned as a team, is that a project should be realistically and not wishfully approached when there's a deadline. We should have either scratched the O2A2 project or decrease the necessary amount of game assets for The Prince’s Heart, etc some of the lines could be unified with other characters to save us time.

The future of the project

Despite the ominous mood I might have prepared you for, the project is progressing fine. All primary characters are designed, but probably we’ll have to do an early release of the game with the majority of secondary characters in flats, along with will the backgrounds.

I really wanted for this project to have character animation (it would be really cool to have the characters breathe), but it's not realistically possible.

What do we have ready as of this moment?

As I said, all main characters (the protagonist and his two love interests) are fully rendered with a wide variety of poses and expressions. Here's a visual representation of what has been done in terms of characters so far.

As for the backgrounds, we’re still a long way from finishing them. Recently, we had two artists joining us, but I don't think that the time will be enough to have all the backgrounds fully rendered by the deadline. All we've done so far are sketches.

In terms of compositions, our composer has practically made a single track for every scene. SFX is still in production state, and we’ll probably have them in the next few days.

The voice acting is nearly complete, and I'm really proud of our voice actors. I'm a firm believer that if you can’t have proper voice acting for your game, it's better not to have at all. All of the VAs have done an amazing job, and I think that you’ll like what we have.

The scripting is 100% completed and transitions around 90% complete. Although I implemented everything, I still find things here and there that need to be adjusted as I alpha test the game. If things go as scheduled, all the transitions will be complete in two days from now (by August 15th).

Last but not least, our GUI is halfway there and will probably be completed by August 20th. 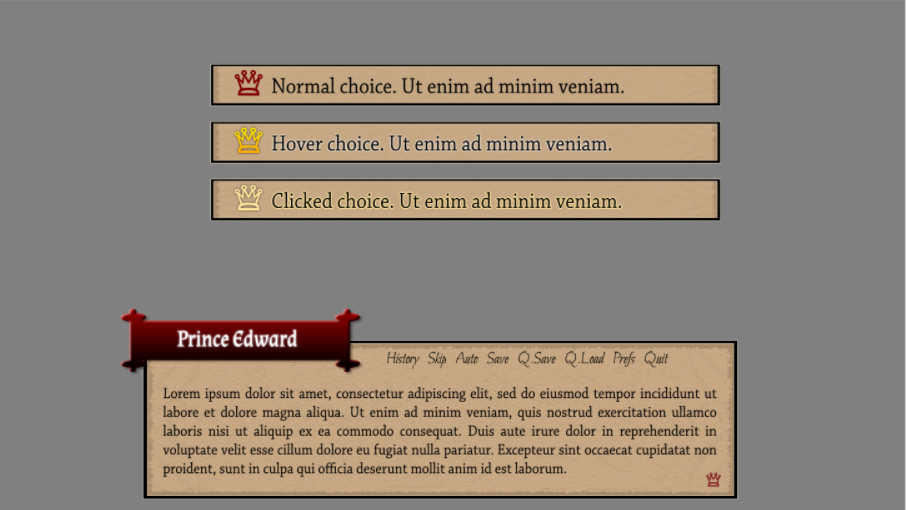 In conclusion, some things worked, some didn't, but we learned a bunch of stuff as a team from this project. What matters is for you, the players, to enjoy our game once it releases. We are looking forward for your feedback, and we’re thankful for your support and love!

Get The Prince’s Heart

A FREE YAOI visual novel that will have you begging for more!